Rear Ended Collision: Who is at Fault for the Car Accident? 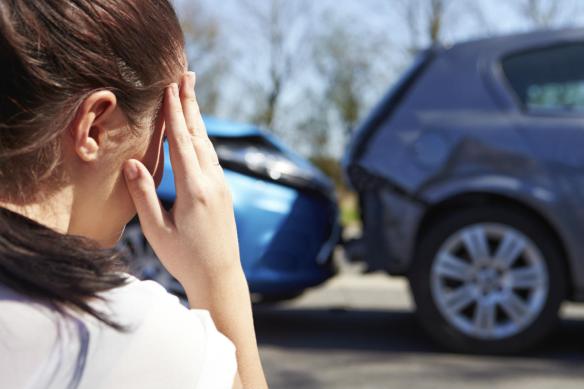 In the United States there are about 1.7 million rear ended collisions on U.S. roadways each year [1]. So, the odds of you or someone you know being involved in a fender bender accident is high. A careless teenager or a glance down at the wrong moment can be all that it takes.

With the advent of self-driving cars these numbers may go drastically down, but for now it’s the reality we live in. If you get in a read end collision you might ask: Who is at fault for this car accident ?

Most of us have probably heard the old adage that the car in back is always at fault, and while this is generally true – the question deserves a more nuanced look.

In this article, I will cut through the noise and definitively answer who is at fault for rear end accidents. In doing so I’ll discuss the following:

When Being at Fault Doesn’t Matter in Rear Ended Collisions

One of the first and most important steps to undertake after your car accident is to figure out whether you live in a “no-fault” state. In a no fault state your property damages are covered by the insurance companies regardless if you were at fault for the accident.

If you live in one of the above no fault states, the question of ‘who is at fault?’ is basically irrelevant.

In these states, if you are involved in a rear end collision you will be compensated for your car accident damages by your own insurance company. Rather than filling an accident claim lawsuit with the courts.

The only exception to this is if your auto accident caused severe or permanent personal injuries. Then you would definitely seek compensation against the other driver’s insurance provider.

Another question to consider is….

Is the Car in Back Always at Fault in Rear Ended Collisions?

Although there are exceptions to this rule, in the case of a rear end accident the driver in back is generally at fault. The presumption being that if you are safely following the rules of the road you should be able to stop and avoid a collision regardless of the circumstance.

This is in keeping with the “Assured Clear Distance Ahead” rule (ACDA) which says you need to leave enough buffer between you and vehicles ahead to avoid an accident. Often rear ending someone is a violation of the ACDA, and definitively shows fault.

There are of course exceptions to every rule…

When is the Car in Back NOT at Fault in Rear End Accidents?

There are of course some situations where the black and white nature of the ACDA blurs to grey. If someone cuts in unexpectedly from another lane or merges at too slow a speed and you collide with them, then what?

In these situations, you, the driver in back, will often not be held liable, or at a minimum a strong debate can be had.

Other situations that will sometimes break from the “back car is always at fault” mantra is anything highly unpredictable or illegal done by the front driver. This can include:

Another exception to the standard rules of rear end liability is the multi-car collision rule. This is regarding the domino effect that occurs when a car is rear ended and then pushed into a vehicle(s) in front of it.

If you think about this in terms of a 3-car accident, the car in the middle is doing no wrong, but technically hit another car from behind.

In these cases, unless the driver was doing something out of the ordinary, the driver of the middle car is often deemed not at fault for the accident.

What Do Insurance Companies Look for When Determining Fault in Rear Ended Collisions?

Next, if you live in a state where fault does have some real implications, then it’s important to understand how the insurance companies will determine who is at fault. This process is simply about trying to determine which party was negligent.

Below are some common things that insurance companies and courts look at:

Car Accident Reports – in many cases an accident is the result one driver breaking a traffic law. Police will often cite the offending party – making it relatively clear who’s at fault.

Witness Testimony – Ideally someone will have witnessed the accident and can give an unbiased account of the events.

Photos or video of the accident – In the age of the smartphone pictures and video of accident relevant details are often readily available. Many intersections now have cameras which not only cite people for violations, but can be useful in replaying an accident.

Accident reconstruction – Computer programs can run a simulation and “re-enact” the accident to help investigators determine who shoulders the blame.

What Happens When Both Drivers are at Fault for the Rear End Collisions?

In many situations accidents are not black and white. Both driver’s actions (or negligence) contributed to the outcome. In response to this states have taken on different approaches, a few go with the “contributory negligence” system, while others have opted for the “comparative negligence” set of rules.

This sounds confusing but it’s pretty simple. Let’s look at the difference between the two:

Contributory Negligence: In states following the law of contributory negligence, if Driver 1 can illustrate that Driver 2’s negligence contributed to the accident to any (no matter how small) degree, Driver 2 is barred from recovering anything at all in a lawsuit against Driver 1. There are a small number of states who adhere to this rule, the more common approach is….

Comparative Negligence: this system is about assigning blame to both drivers at varying amounts. Depending on the situation this may increase or decrease a driver’s liability. There are two basic formats for this:

1. Pure comparative negligence: liability for an accident is split according to the percentage of each driver’s fault – often determined by a court or as an agreement between insurance companies.

2. Modified comparative negligence: liability is divided based on the percentage of fault — to a certain degree. Translation: once a driver exceeds a certain level of fault they cannot seek damages from the other party. That level is often set at 50%.

As you might suspect, each state has slightly different rules in how they interpret negligence.

If you have been involved in a rear end collision it’s good to keep in mind what we’ve discussed here:

Some other good rules of thumb to follow is: do your best to remain calm, make sure everyone’s okay, don’t debate fault with the other party, and do what you can to document evidence.

These things happen, and being armed with a bit of knowledge is often our best defense. Good luck.

From Rear Ended Collisions to >After the Accident Home