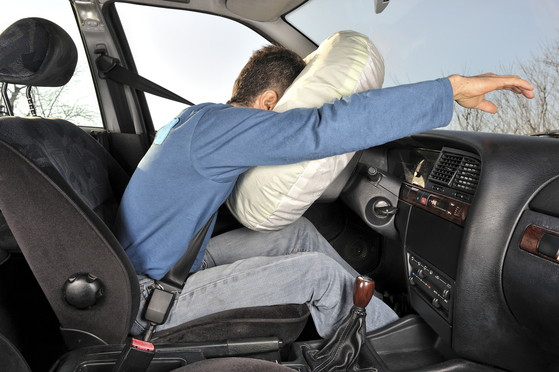 Airbags are an invention that have saved thousands of lives [1], but in doing so they’ve also caused quite a few injuries. If you’ve suffered airbag injuries in a car accident we’ll explain everything you need to know in order to get a fair accident settlement.

In this article, we’ll cover the following question…

How do your airbags actually work?
What causes an airbag to deploy incorrectly or malfunction?
What are the most common injuries from an airbag?
How can I sue for an airbag injury?
How can I prove an airbag malfunctioned?

How Do Your Airbags Actually Work?

Most (newer) cars are outfitted with a driver and passenger side airbag. The size of an airbag varies car to car, but the drivers side will be slightly bigger than the passengers (as the steering wheel is closer than the dashboard).

The airbags are connected to a crash sensor, which will be ready to fire the airbag if the car gets into a severe enough accident. This usually means a head-on or near head-on crash going at least 10-15 MPH[2].

If the crash sensor is triggered the airbag will explode outwards and act as a life-saving shock absorber. This inflation process is generally fueled by nitrogen or argon that react in a quick pulse to shoot the bag outward. The airbag will deploy in a split second because in the event of a crash there is no time to waste.

Once deployed the airbag will quickly deflate but some people have reported a chemical like smell/dust that can irritate your eyes or skin. Be careful not to inhale any of this substance.

What Causes an Airbag to Deploy Incorrectly or Malfunction?

Sometimes airbags can malfunction. Often times it’s the crash sensor that fails which causes the airbag to not work properly. For example, the airbag deploys when it shouldn’t or it does but at a greater force than it should.

The crash sensor malfunction could be due to physical problems, such as incorrect placement, broken parts etc. It could also be due to software issues, such as being programmed incorrectly and affecting the time of airbag release and the force of impact.

If the airbag did not work properly the most important thing you can do is to document this via photos and be sure to preserve the airbag itself as evidence.

What Are the Most Common AirBag Injuries?

For a device meant to save lives, airbags are the culprit of a surprising number of injuries. In some senses, this can be the difference between a simple bruise nose or a fractured skull.

With so many different body parts potentially exposed to an airbag, the range of injuries you can sustain varies a lot. Here are four of of the most common airbag injuries:

If an airbag catches you in the eye this can also lead to severe injury and temporary (or sometimes permanent) blindness. Other injuries that can occur with airbags are:

The incidence and severity of airbag injuries also have been shown to link to height [3]. So be sure to have kids ride in the back seat.

How Can I Sue for Airbag Injuries?

To be properly compensated from your airbag injuries, you first need to identify “who is at fault?”

To do this, make a list of all parties that could be potentially responsible for your pain and suffering.

For example, If you believe a faulty airbag is the cause of your injuries, you could pursue a product liability claim against the manufacturer. You could start by researching the make of your car or airbag to see if there is a known problem.

In the case of an accident where the airbag performed normally but you still suffered injuries, you can simply treat it as a typical bodily injury claim against the other driver’s insurance.

Go to the doctor, document your injuries and submit a claim in a timely manner. Then you could receive compensation for your medical bills, lost wages or pain and suffering.

How Can I Prove an Airbag Malfunctioned?

Answering these questions helps identify if your injuries primarily due to a malfunctioning airbag. This shifts the responsibility on the manufacturers and increases your chances of getting a fair injury settlement.

You can further show if your airbag malfunctioned :

Although the main job of airbags is to protect us, there are times when they can be the cause of injuries after a car accident.

To receive a fair accident settlement, remember the following:

From Airbag Injuries to What is My Pain and Suffering Worth?