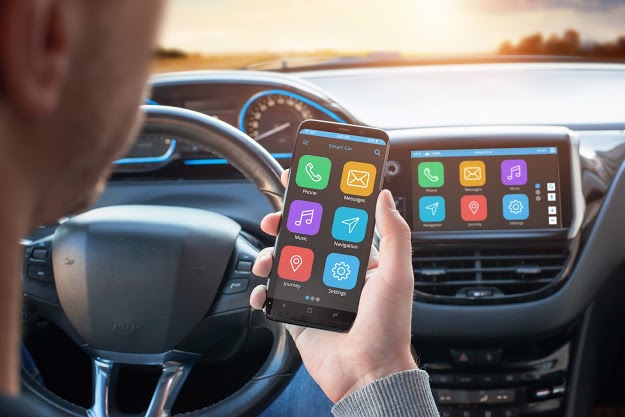 It’s no secret that car accidents are one of the leading causes of death in the United States. Over the past decade, thousands of people have lost their lives in fatal car crashes. 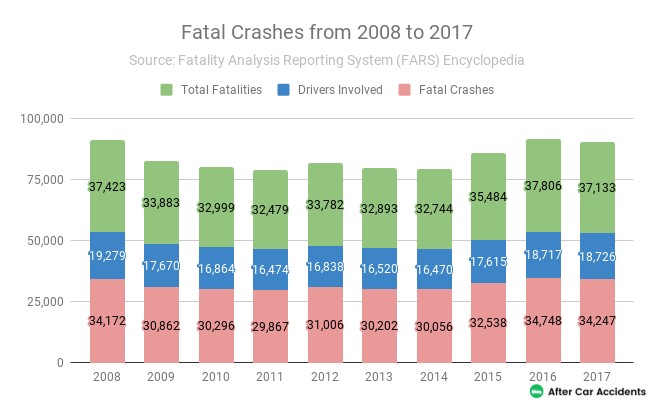 We’ve written a separate article on the various causes of car accidents.

In this article, we’re going to dive deep into one of the well-known causes of car accidents: cell phones. 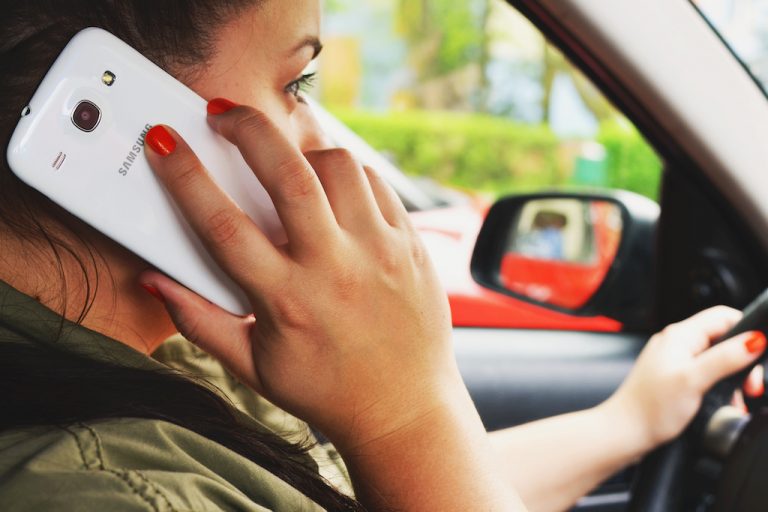 There is no question that the rise of mobile devices has led to increased risky behavior for drivers on the road.

This rapid rise in cell phone usage has dramatically increased the risk of individuals being distracted while driving.

Experts estimate that sending or reading a text takes your eyes off the road for 5 seconds. If you’re driving at 55 mph, that would be the same as driving the length of an entire football field with your eyes closed. That’s incredibly dangerous behavior; not just for the drivers but also for other driving vehicles/pedestrians on the road.

“Nearly 390,000 injuries occur each year from accidents caused by texting while driving.”

This number claim to be quoted from the National Safety Council. Because of the supposed source’s legitimacy, many others have cited the statistic.

Unfortunately, it’s not entirely accurate and was, in fact, exaggerated for shock value.

It’s a misquoting of the actual statistic, which is that in 2015, 391,000 people were injured in motor vehicle crashes involving all types of distracted driving.

What is Distracted Driving? 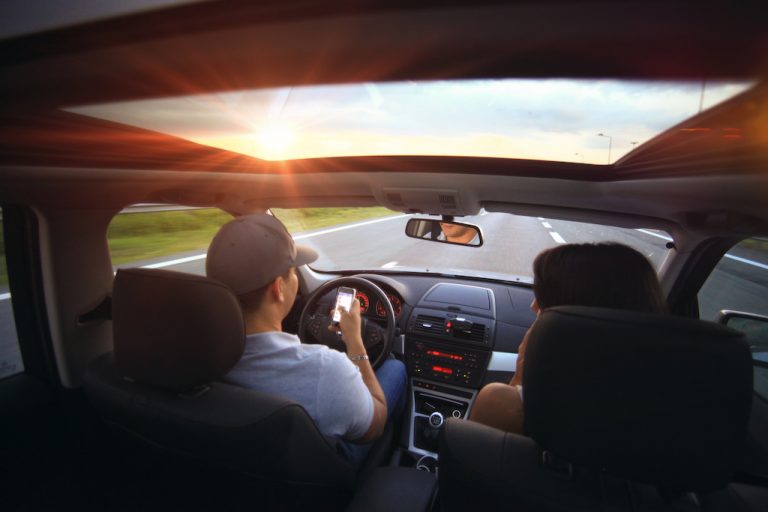 Distracted driving is ANY behavior that can divert your attention while driving. This behavior can include:

…. and of course, using your cell phone.

Here are the most common sources of distracted driving: 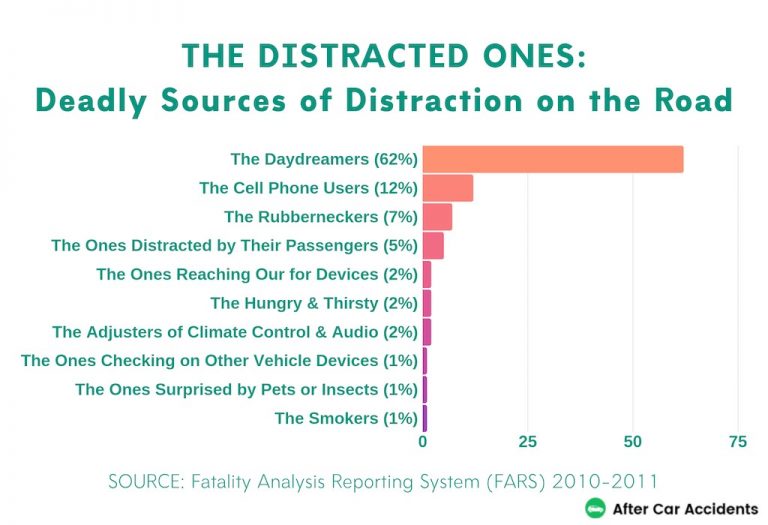 As you can see, cell phone accidents are not the ONLY source of all those 391,000 distracted driving accidents.

So What are the REAL Cell Phone Accident Statistics?

Of those fatal accidents, 9% were related to Distraction-Affected (D-A). And of those deadly distracted driving accidents, 14% were due to cell phones. 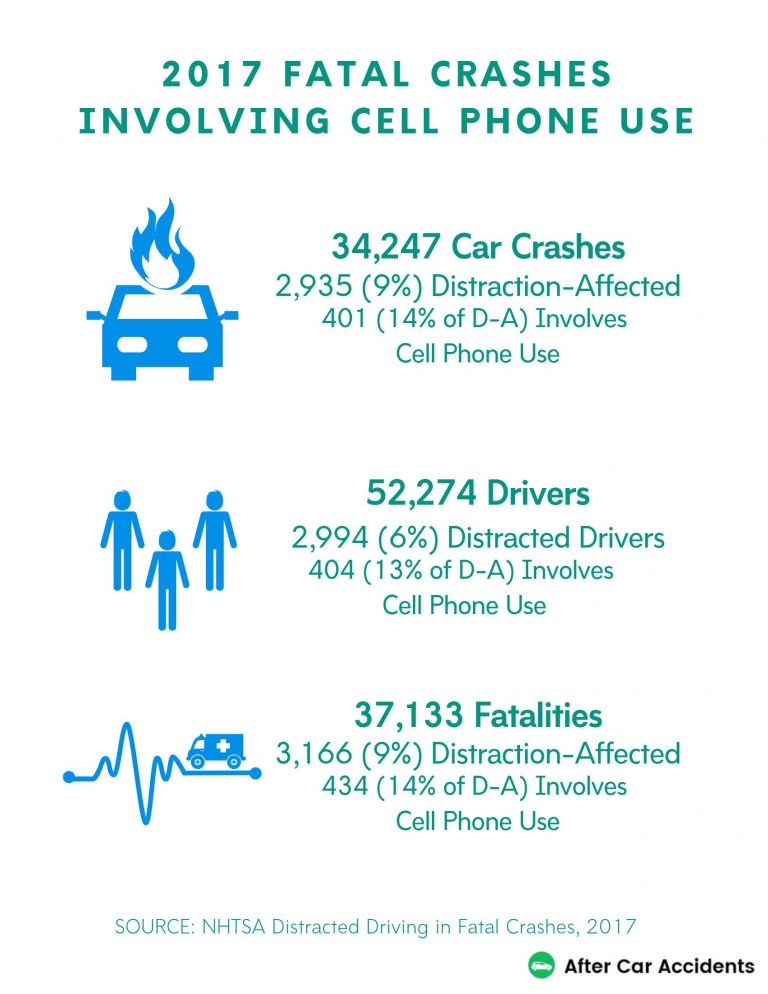 This trend of D-A and cell phone fatal accidents has been consistent for the past several years.

Let’s admit it, most “grown-ups” of today would blame teenagers for being the major contributors to car crashes, especially distracted driving-related accidents. However, this does not seem to be the case!

In 2017, approximately 52,000 drivers were involved in fatal crashes, and nearly 3,000 were due to distracted driving [2]. Here is the distribution of the accidents by age group. 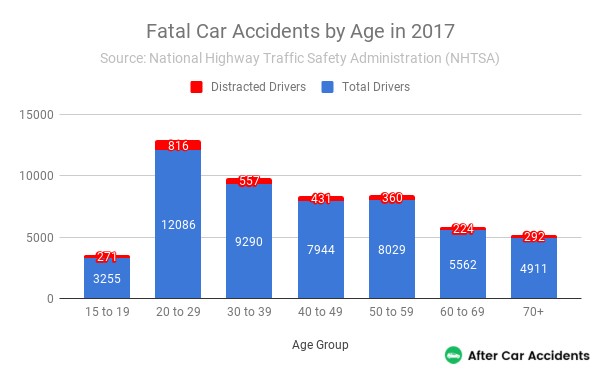 Here is the distribution of what percentage of these accidents were due to distracted driving: 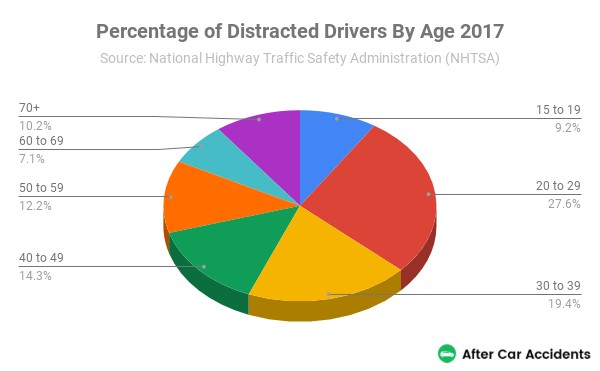 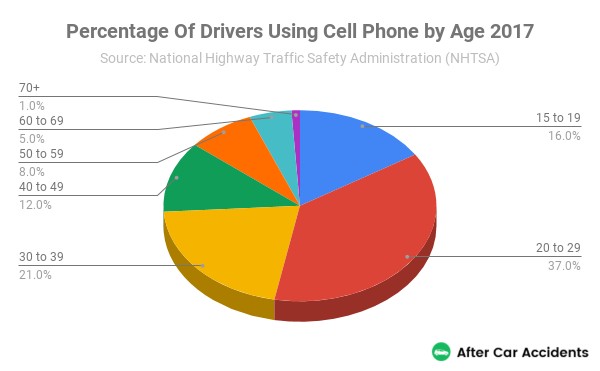 As you can see from the above graphs, drivers under the age of 30 accounted for a higher percentage for both distracted accidents and cell phone accidents.

How many people use Cell Phones while driving?

To understand why there are so many cell phone accidents, it’s useful to know how people use their phones while driving.

Below are the percentages of drivers involved in these behaviors. These percentages were based on 415,953 drivers on a typical day in 2017.

It is estimated 5.3% of the drivers were using some type of phone, either handheld or hands-free on a given day. That’s around 22,000 drivers using their cell phones while driving per day! 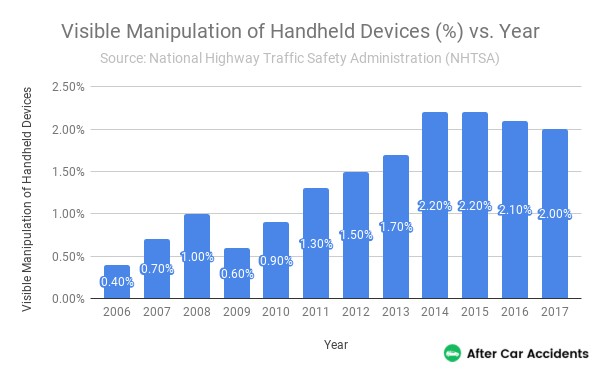 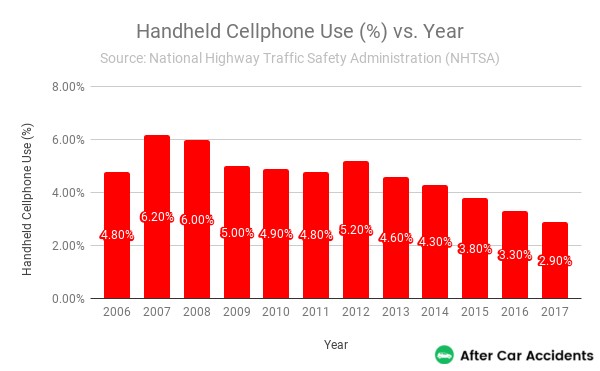 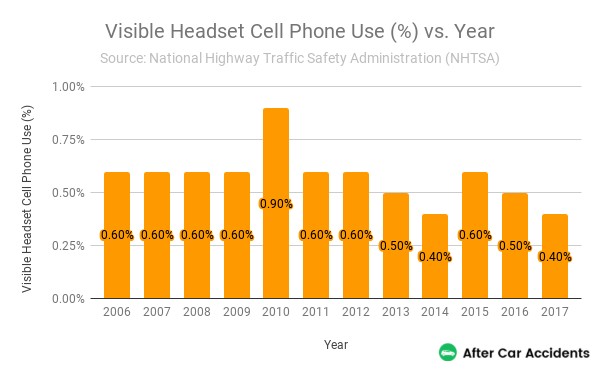 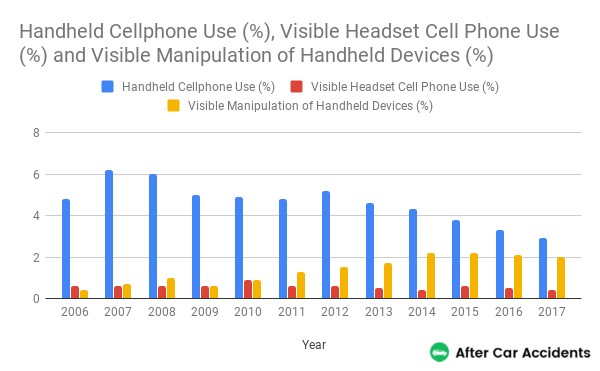 It was observed that handheld cell phone use was higher among female drivers than male drivers.

It was also shown that young drivers (between 16-24) were observed to have higher rates of using their phones, both handheld and visibly manipulating them.

While we mentioned earlier that teens are not the majority contributor to distracted driving-related accidents, it appears that the younger generation aged 16 to 24 years old are the ones who are using cell phones while driving more often. 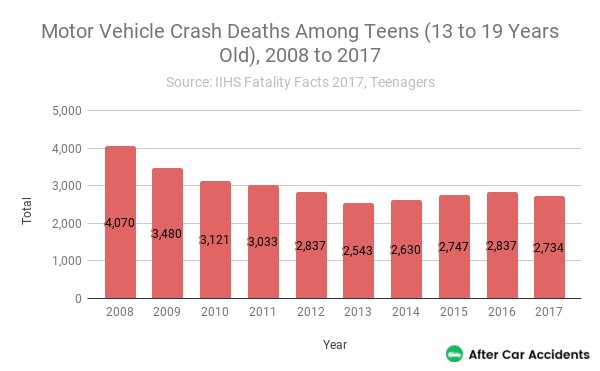 The data above includes teenagers who died in accidents where they were either the driver or not. The numbers also include incidents where the tennagers were passengers, pedestrians, motorcyclists, bicyclists, all-terrain vehicle riders, and others.

Motor vehicle crashes are found to be the top cause of death among teenagers in the United States in 2016. 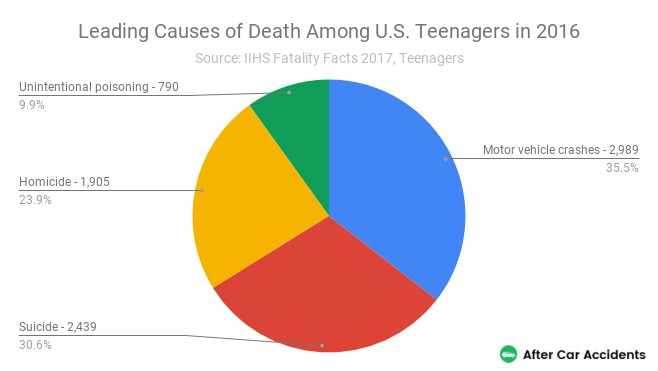 Let’s dig even deeper into these fatal crashes involving distracted driving and cell phone use among teenage drivers. 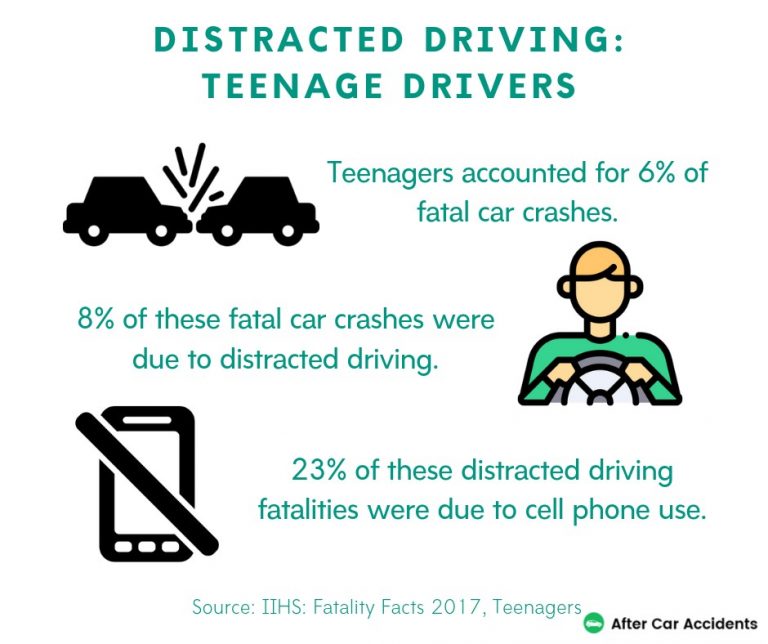 Thousands of teen drivers were involved in fatal crashes in 2017. 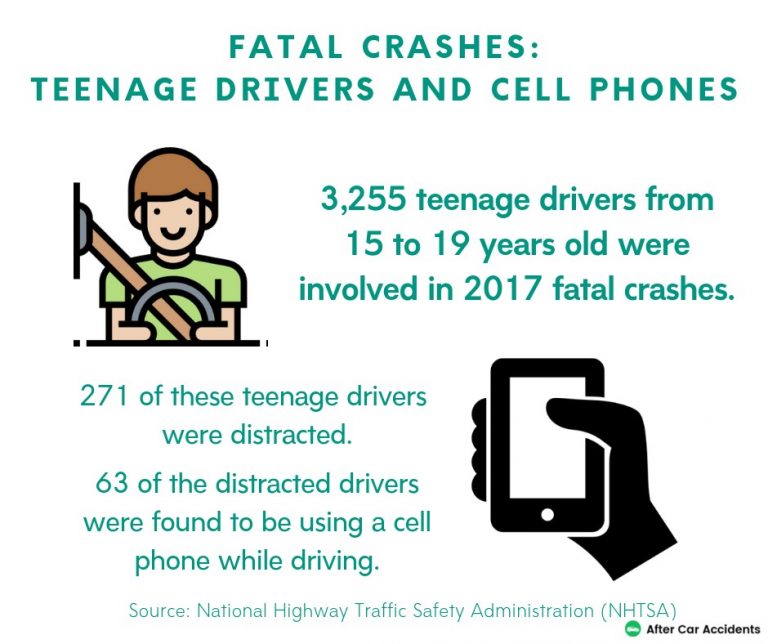 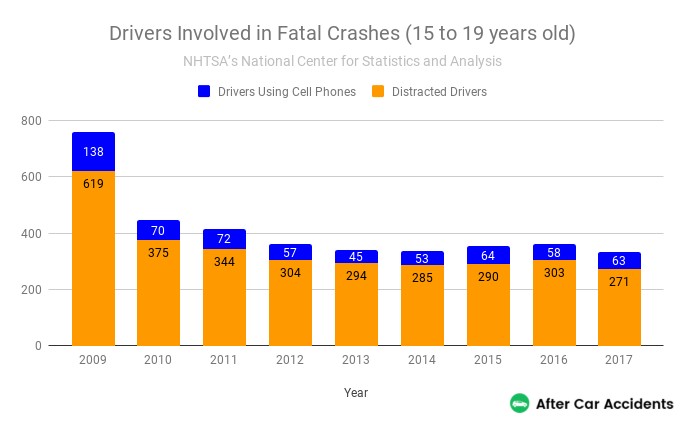 It appears that the numbers of teenage drivers involved in D-A crashes remained almost constant over the years. One thousand two hundred teens aged 15 to 19 years old were surveyed in the United States [5].

Ninety seven percent of the surveyed teenagers agreed that texting and driving is dangerous. However, many of them continue to do it. 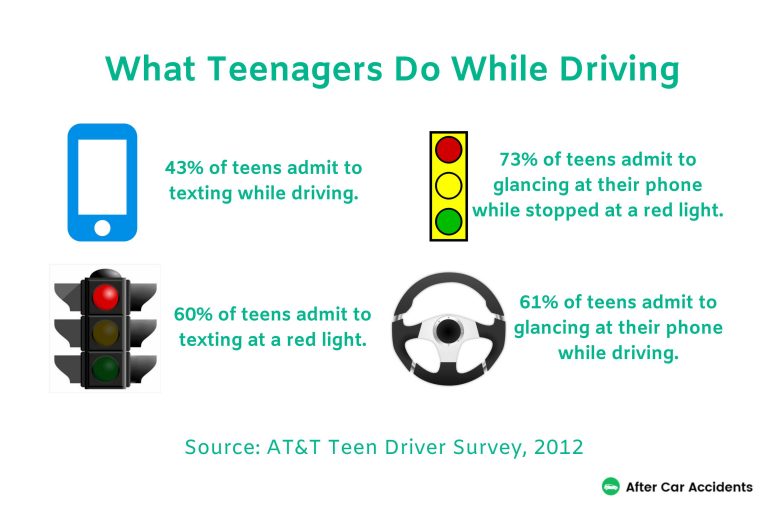 A national survey uncovered several interesting results about drivers’ willingness to use their cell phones while driving [6]: 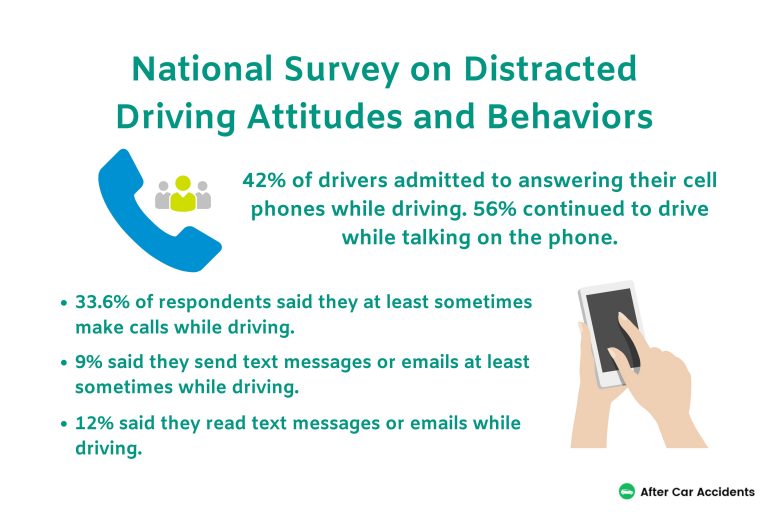 Drivers were asked if they send and read text messages or emails while driving [6]. They found:

Calling and texting are no longer the only features of cell phones these days. Since there are many smartphone users, some drivers use mobile apps while driving. According to the same survey cited above: 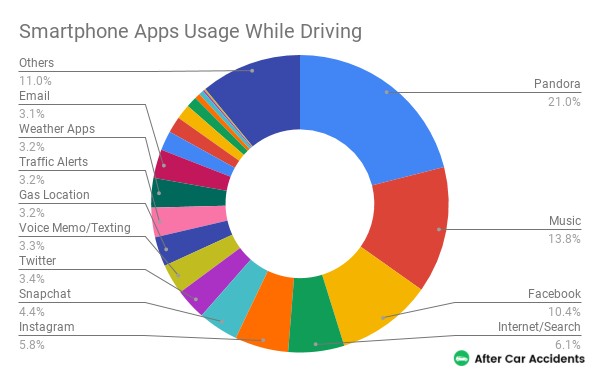 With accident numbers continuing to rise yearly, is the government doing anything to put a stop to car accidents involving cell phones?

Due to the high risk of cell phone accidents, many states have added laws and penalties to discourage people from driving and using their phones.

Fifteen states have banned drivers from handheld cell phone use while driving [2]. 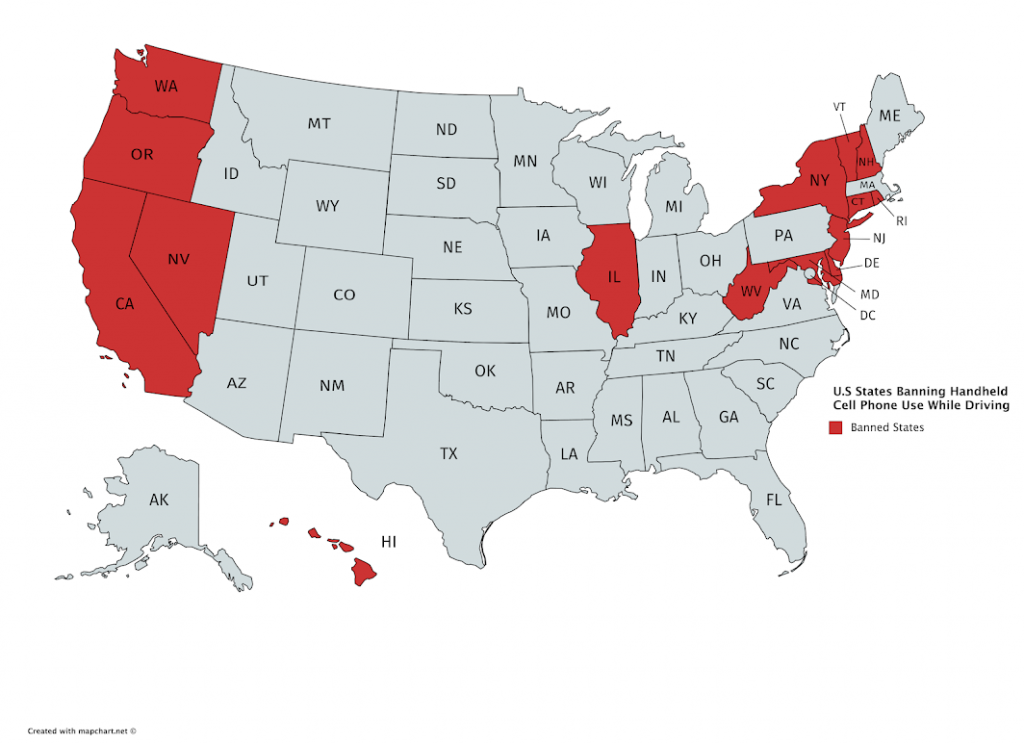 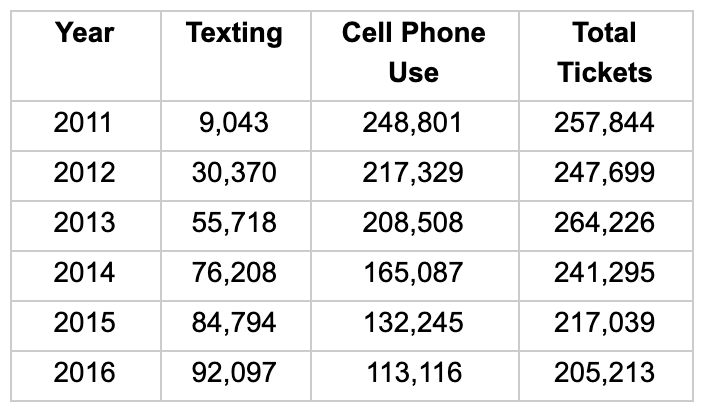 Many have the impression that New York is far from laid back and relaxed. Everyone seems to always be in a rush. One would expect that New York has the highest number of car accidents involving cell phones in the United States. But does it? 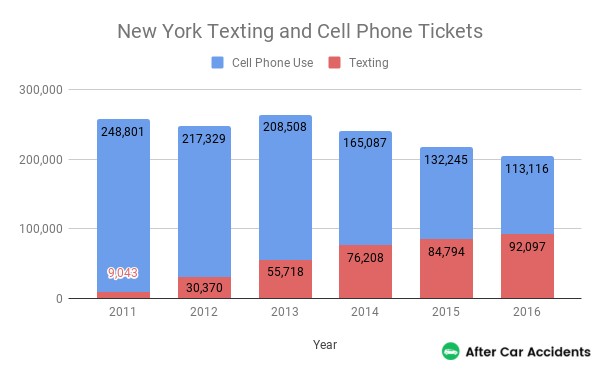 As you can see the trend of texting and driving fines has been steadily increasing over the past few years. In 2011, texting violations accounted for only 3% of total tickets issued. But in 2016, 44% of the tickets were due to texting and driving.

That’s a 918% increase in tickets for texting and driving! 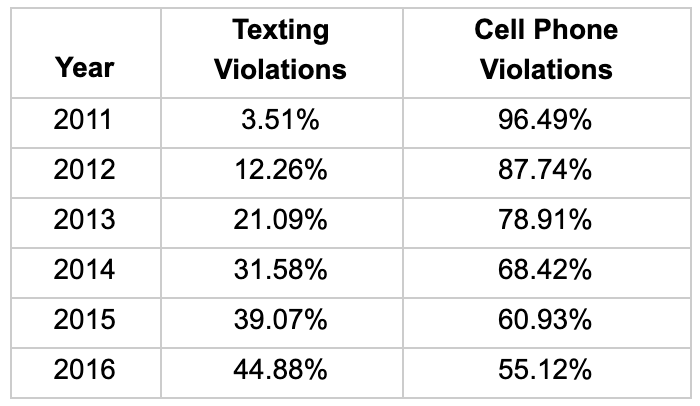 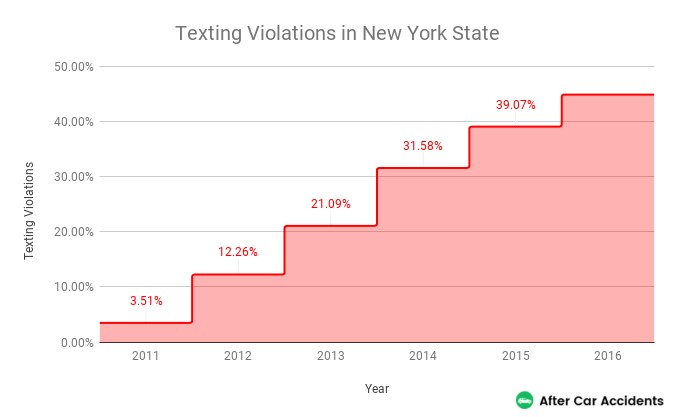 Fines and Penalties For Texting and Driving

Here is an interactive map of all the ticket fees for driving and cell phone usage per state.

Below is a list of penalties per state that you should be aware of in case you plan to visit and use a cell phone while driving [8].

Any responsible driver knows that there is absolutely no safe way to text and drive.

The easiest and best way to prevent texting and driving accidents is by training yourself to stop looking at your cell phone once you start driving.

There are also phone apps that can help prevent distracted driving.

Then again, you must realize that it is never safe to text and drive. No app, law, or massive penalty can help you if you refuse to resist the temptation of checking out your phone while you’re driving. Think of yourself, your passengers, your loved ones, all other drivers and their passengers, and everyone else who might be affected if you decide to text and drive. The change must come from within you.

Distraction.gov was a US government website that provided general information, news and facts on distracted driving. Through the website, visitors could also get involved in activities aimed at discouraging unfocused driving. Because, in this article, we aim to present the statistics on texting and driving in 2019, Distraction.gov would have been an important site for checking the veracity of the information available on different online resources.

However, an attempt to access the site brings back the message “www.distraction.gov’s server IP address could not be found.” Considering the importance of campaigns involving distracted driving, it is surprising that a government department would shutter a resource such as this one. Hence we decided to start by finding out what happened to the website. We then gathered statistics from 2008 to 2017 in an attempt to separate myth from fiction when it comes to the role played by cell phones in distracted driving.

What Was the Purpose of Distraction.gov?

The website also listed several reasons behind distracted driving: the presence of pets and children in the car, stressful jobs, and busy lifestyles. With advances in technology, distracted driving usually involves using an electronic device like a mobile phone. However, it may also include adjusting the car radio, the satellite navigation system or reading advertisements on the side of the road.

Distraction.gov first appeared on the internet in 2010. At this time, apart from carrying facts and figures, the site also attempted to answer questions linked to distractive driving, such as the ones we list below (Source).

By August 2015, Distraction.gov not only had a new design, but it also covered the US Department of Transportation’s activities. Three new links where introduced: a pledge that drivers could download and sign, information about campaigns, and other resources that visitors could download.

In 2016, the US government shut down Distraction.gov. Although we searched, we couldn’t find any published report that explained why the site was shuttered.

8. Texting and Driving Fines by State