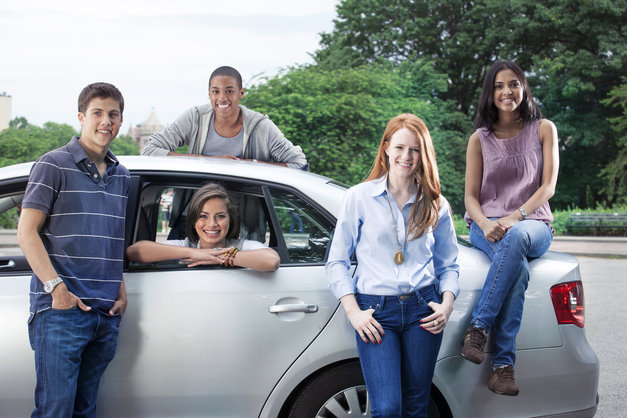 According to the Center for Disease Control young drivers present a significantly higher than average risk of getting in a crash [1]. There is, of course, a distinction to be made between teen motorists and those in their younger 20s, but the point stands.

Because of this added risk insurance companies tend to charge more and finding cheap insurance for young drivers is a challenge.

An Overview of Insurance For Young Drivers

To get the best deal on a policy for your son or daughter (or for yourself) there are some basics things you need to know. Here’s a brief primer.

The cost of adding a new driver to your insurance plan is notoriously expensive, so much so in fact that Forbes and NBC news have both dedicated posts to discussing it [2] [3]. Coverage for an inexperienced motorist is generally more costly than that of their older counterparts. Unfortunately, not much can be done to change this, but you may have more influence over a few factors.

The price you ultimately pay for insurance depends heavily on where you live. Research (also from the Forbes article) notes that premiums go up in New Hampshire an average of 111% when a young driver is added whereas in Hawaii this number is only 17%.

There are a number of things people can do to keep costs down, however. Below we’ll list some tips that directly affect premiums but other things to be done are:

Should a New Driver Be Added to An Existing Policy?

In the quest for affordable insurance one of the most common questions, a young driver will face is should they stay on a family policy or purchase their own?

There are pros and cons to both of these scenarios.

Joining a parent’s existing policy, for example, will generally spell lower rates. Parents tend to have an established credit history, more than one car, and/or own a home, which lowers their risk in the eyes of an insurance carrier — hence lower rates.

Perhaps a parent has a terrible credit score or driving record. In this case, it might make sense for someone to strike out on their own. Also, depending on the relationship between the parent and the driver an auto policy may be a source of friction in the relationship.

Regardless of whether you’re a parent footing the bill for your child or a person buying your first policy, you’ll want to do whatever you can to save some money.

Here are five things you can do to help avoid breaking the bank.

Young drivers present a unique risk both on the roadway and (potentially) to their parent’s pocketbook. But by understanding the dynamics of insurance and taking a few steps you can make sure that a youthful driver is covered and can keep costs manageable.

Let’s do a quick review of the most critical points you’ll want to keep in mind: